Olympia is here! She arrived about an hour later than expected (in true cat fashion she came when she damn well felt like it) and is now adjusting comfortably to her new surroundings (I hope). Right now, she’s inside an open carry case in our home office, which has been decked out with food, a litter box of her own, and a comfy purple towel (pictured) to sit on when she decides to leave the safety of the carry case. The towel already smells like Alexa, which we’re hoping will put Olympia at ease around us. 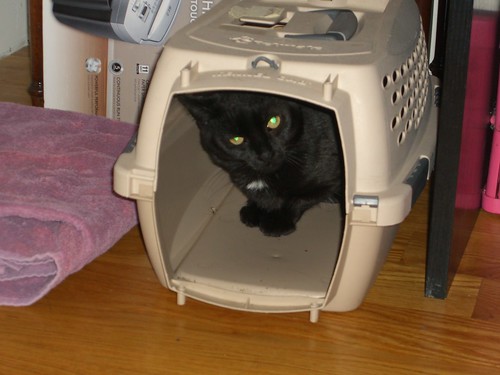 That’s not a head-tilt of curiosity in the picture, by the way, though I’m sure she has a healthy dose of that, too. No, that’s residual damage from a since-removed ear polyp that knocked her off balance. Most likely, she’ll always have a head tilt like that because the surgeons had to take out some of her ear bones, too.

Our other cat, Galapagos, who’s been queen of all she surveys for nearly eight years now, surprised me by not reacting aggressively when Olympia arrived. I was worried Galapagos would immediately start hissing and pawing under the office door to get at Olympia, but instead she’s acting more standoffish, almost scared. (The only hissing she did was at Olympia’s foster mother when she came to drop Olympia off; it was only once, and Alexa tells me it’s the first time she’s ever heard Galapagos hiss.) Currently, Galapagos is staying all the way on the other side of the apartment, although she is no longer hiding under the bed. She’s still letting me pet her, too, so she’s not blaming me for the new cat’s presence. At least, not yet.

It’s going to be a long time before Olympia lets me pet her, though. She doesn’t even want me putting my hand in the carry case. Right now I’m more concerned that she won’t leave the case to eat anything, but I’ve been assured that cats won’t starve themselves to death. She’ll eat, I simply may not see it happen.

Speaking of eating, Galapagos is going to have to come closer to the office door eventually, because we moved her food dishes there. All part of our nefarious plan to get them used to each other.