I can’t believe we’ve had Olympia for two weeks now! It’s been going very well. We kept her shut away in our home office during that time, and she would spend most of her time in the carrier. Sometimes she would fall asleep while we were in the room with her, which I took as a good sign that she was getting comfortable around us. Also, she snores. A lot. Sometimes she would leave the carrier and explore the rest of the room when we weren’t there, and later we’d find her under my desk or Alexa’s. She’s been eating and using her litter box like a pro. She’s still not cuddly, and may never be, but she has come to let us pet her on the head on occasion, either with our hands or with the soft “petting stick” we made out of a Quickie microfiber long duster. She developed tapeworms from back when she used to have fleas, so we brought her to the vet and got her dewormed. We also got some shmear to put on her and on Galapagos should the fleas decide to make a reappearance.

She walks low to the ground like a lizard, due to her inner ear issues that put her off-balance, and somewhat lopsided. It’s kind of cute, actually.

I absolutely underestimated Galapagos. I thought she was going to make poor Olympia’s life a living hell from day one, but instead she’s been great. There was some growling through the door between the two of them, but that was it. Otherwise, Galapagos has remained calm and affectionate.

Last night, we finally opened the door to let the cats introduce themselves for real, and to give Olympia free run of the apartment. There was some hissing and growling, but no fisticuffs (pawsicuffs?). They’re keeping their distance from each other and not fighting. I’m enjoying the quiet while it lasts. In the meantime, Olympia has already made herself at home: 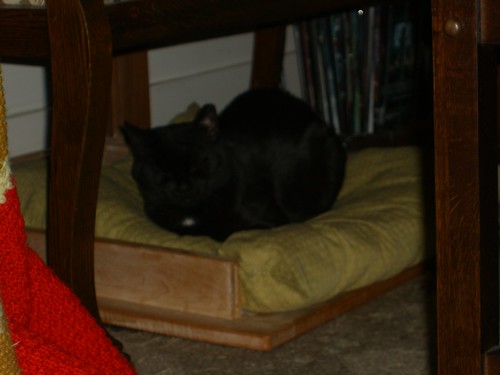 Here she is having stolen Galapagos’ pillow in the night. See, right at home? This makes me think Olympia may wind up being the more dominant of the two after all. I suspect it may be because she’s been a mother and knows how to keep other cats in line. That’s just a wild guess, though. Olympia is currently hiding under the wingback chair in the living room while Galapagos sneaks drinks from Olympia’s water bowl, so who knows how this will turn out?

Well, I do know one thing. Despite my worries that Galapagos would never share her home with another cat, it looks like this is going to work out just fine.

(Edited to add: Galapagos just chased Olympia into the office with me, and now she’s flagrantly drinking from Olympia’s water bowl right in front of her. The struggle for dominance continues!)

I think I forgot to post this earlier. This is Fabio Listrani’s amazing illustration for my story in Zombies Vs. Robots: This Means War, “The Sorcerer’s Apprenticebot.” 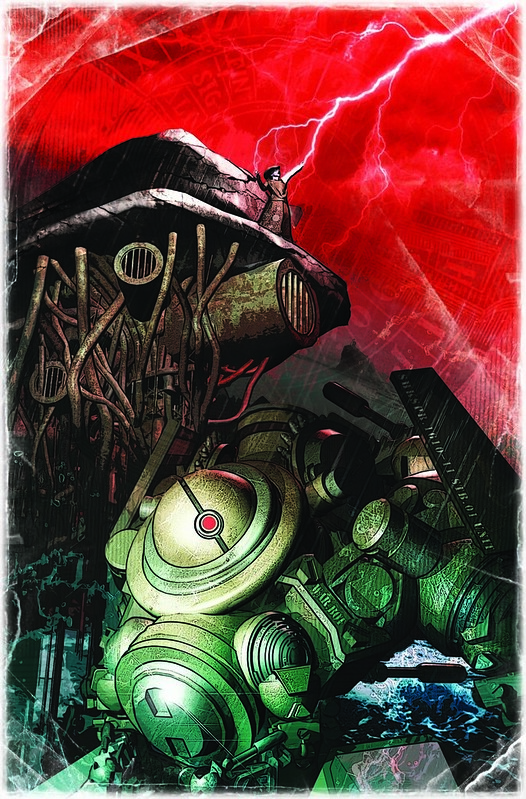 Pretty damn cool, huh? Now go see what all the hubbub is about by ordering your copy of Zombies Vs. Robots: This Means War today!