Welcome, folks, to the triumphant return of the Straubathon! After a hiatus that went much too long--the last Straubathon entry, The Throat, was back in June of 2009!--I have returned to my plan to read all of Peter Straub's books in order. The next on my list was 1996's The Hellfire Club, which I finally and eagerly dove into.

The Hellfire Club is a bit of an odd duck, I discovered, and the first Straub novel that didn't completely blow me away. Well, that's not entirely true. The first third of the novel got my synapses firing, certainly. Nora Chancel is a great character, as is her odd husband Davey and her mean and eccentric in-laws, Daisy and Alden. There's a hugely compelling literary mystery to be unraveled, as well as a disappearance and possible murder back in the 1930s at the center of it all. Straub's creation of living, breathing, fully dimensional characters and his doling out of clues are handled as masterfully as ever. There's nothing more interesting than stolen manuscripts, secret authors, and old blue-blood families with skeletons in their closets!

Then the novel takes a wrong turn, in this reader's opinion, with the introduction of Dick Dart, a deranged, misogynistic serial killer who kidnaps Nora just as she's accused of being involved in a present-day disappearance. In his lunacy, Dart thinks of Nora as a fellow criminal, someone just like him, and instead of killing her he keeps her around to both torment and instruct. But where everything in the novel felt alive and popping for me, suddenly things got flat when Dart took center stage. I don't know what it is, Dart is certainly a compelling villain, but he seemed to me to belong in a different book. Here, he feels more like a tangent taking me increasingly away from the plotlines, locations, and characters I found so interesting. The answers Nora discovers on her journey with Dart, leading ultimately to the solution at the heart of this mystery, could have just as easily been unearthed in ways that didn't involve Dart, which makes him not just a tangent but strangely superfluous.

That's just my opinion, of course, and The Hellfire Club has plenty of great things to offer the reader, not the least of which is Straub's own rather brilliant mind. But where novels like Koko and The Throat left me gasping for air when I finished them, The Hellfire Club left me with a shrug.

It's been a while since I've posted one of these. Here's another example of an inadvertently hilarious typo found in the wild, this one from an ad in a local Brooklyn newspaper: 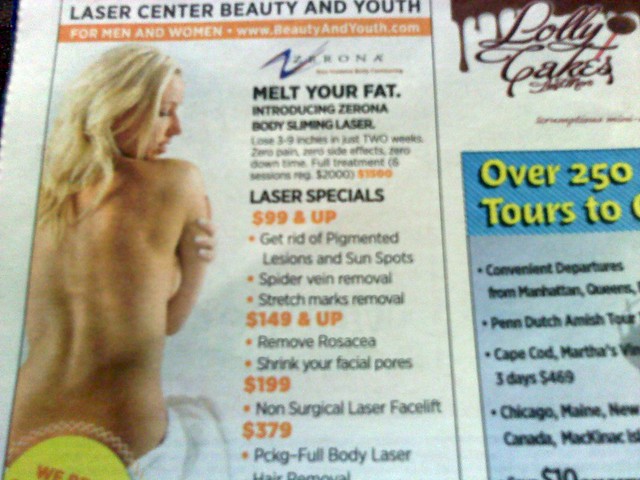 It's a little fuzzy, so in case you can't read it, the ad says:

Seriously, people, proofread. It's important. If you can't do it yourself, hire someone. Me, for instance. I'm affordable and available!
Collapse