Occasionally, writers do things with their time other than write. (Shocking, I know!) This weekend, Alexa and I attended to a home improvement project we'd been putting off for a long, long time now. Upholstering the couch! 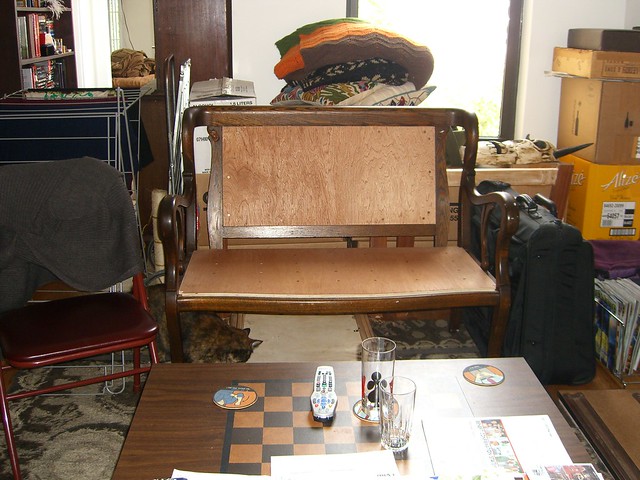 This is what the couch looked like. (Please excuse the clutter. Right now we're storing all the not-yet-unpacked stuff against that wall.) We wanted a wooden frame so the cat couldn't slash it to ribbons the way she would leather or fabric. When Alexa ordered it from eBay, it was just the frame, it didn't even have the wooden seat and back you see here. Our friend Kirby made those for us, in return for some bourbon and steak. The plan was to upholster it with a cat-resistant fabric. By which I mean something her claws wouldn't instantly get stuck in, and a color that wouldn't show the mounds and mounds of hair she will inevitably shed upon it, since nothing is truly cat-resistant.

However, after we moved in together time got away from us, and for months this was how we made our couch livable: 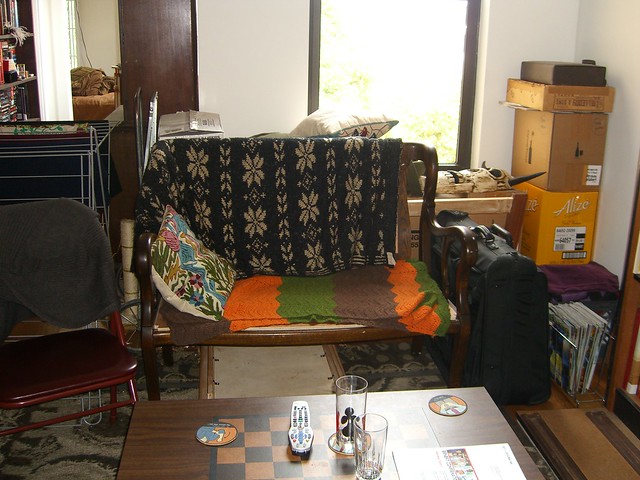 If you can call that living! Actually, the afghans made it pretty comfortable. Or semi-comfortable, anyway. But after a while your butt would hurt from the lack of padding between you and the wood. In other words, it still wasn't a proper couch.

So we finally made the time to visit several fabric stores, and found what we were looking for at a store just off Canal Street. Then we took those removable wooden pieces Kirby made for us to a foam and rubber store on Canal (seriously, Canal is the place to go for upholstering projects!), where we had furniture foam cut to size (followed by a delicious dim sum lunch in Chinatown, since we were already in the neighborhood!). Some Gorilla Glue, a few heavy books to act as clamps while the glue dried overnight, and one staple gun later, and voila: 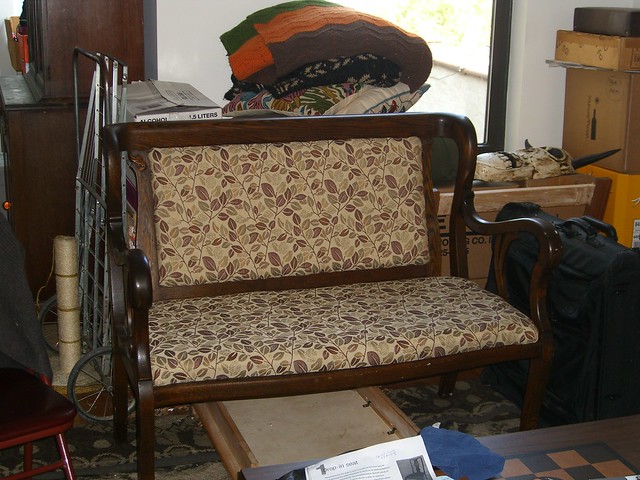 Now we're livin' large and in charge! Or at least without sore butts. I'm kind of proud of us. Neither of us had ever upholstered something before, and it came out so beautifully I'm really amazed!
Collapse