You guys, being an extra on the set of a horror movie last night was so much fun, despite the freezing cold of a twelve-hour overnight shoot! I'll be writing up the experience for Rue Morgue magazine, and it'll probably appear in 2012 when the film is released. (Sorry to be so vague, but I don't want to step on any toes by announcing which film it is too soon.) 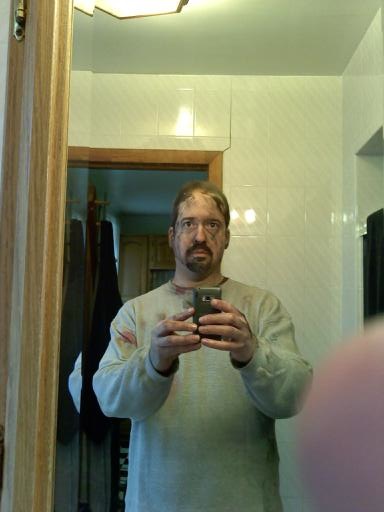 The makeup artists went crazy on me, in a great way, but through a confluence of events I wasn't able to remove all the makeup before hopping the D train back home during, yes, morning rush hour. The photo above is pretty much what I looked like when I got home at 8 A.M., though you can't really see all the stage blood on my face and hands.

You can imagine the looks I got on the subway! I frequently had to put my fellow commuters at ease by telling them it was makeup, not real. An EMT doctor on the train thought I'd been hit by a car!
Collapse