Actor Leslie Nielsen has died at the age of 84.

Like so many people of my generation, I never really knew the Nielsen of Tammy and the Bachelor or Peyton Place or even The Poseidon Adventure. No, I first encountered Nielsen as Dr. Rumack in 1980's brilliant, absurdist disaster spoof Airplane! Later I would learn of, and finally see, his dramatic turn as Commander J.J. Adams in the trippy 1956 science fiction adventure Forbidden Planet ("The Id? What's that? Talk, Doc! Doc? Oh, Doc."), and his campy turn as Richard Vickers in 1982's Creepshow ("I can hold my breath a long, long time!"), but to me Nielsen will always be Lieutenant Frank Drebin, first of the short-lived but genius 1982 TV series Police Squad! and then of the Naked Gun film series (co-starring O.J. Simpson!). The role was perfect for him.

From the 1990s on, he was pigeonholed in one terrible so-called comedy after another: Repossessed...Dracula: Dead and Loving It (also quite possible Mel Brooks' lowest point)...Spy Hard...Mr. Magoo...2001: A Space Travesty...Scary Movie 3...Scary Movie 4...Stan Helsing... The list feels almost endless, and each of these films was well beneath his considerable talent. But a working actor is a working actor, and like Ingrid Pitt, who passed away last week, Nielsen was still working up to his death. His choice of projects may not have been top notch, but you've got to be impressed with that kind of work ethic, especially from someone in his 80s.

Surely you'll be missed, Leslie Nielsen. And no, we won't stop calling you Shirley.

A female passenger has claimed that she was assaulted by TSA agents when she was ordered to be patted down because her sanitary towel showed up on the body scanner. The woman was wearing a flannel panty liner, that evidently aroused suspicion, causing her to endure what she described as a "horrible" experience. She said the invasive patdown was additionally humiliating because it brought back memories of a previously suffered sexual assault. "But what ultimately happened is that I was subjected to a search so invasive that I was left crying and dealing with memories that I thought had been dealt with years ago of prior sexual assaults."

Just a reminder, folks: these TSA horror stories you're hearing? They're not happening under a reactionary Republican administration. They're happening under a so-called progressive Democratic one. And the Obama administration is joining the TSA in its "shut up and take it" attitude, going so far as to call stories like the one above exaggerated or even fabricated.

Still think one political party gives more of a damn about you than the other? Here's a lesson to take home. Neither party gives a flying fuck about you, your civil rights, the Constitution, or anything other than looking tough and holding on to power, no matter what the cost. The sooner we commit that lesson to memory, the sooner we can do something to change it.

Until then, and here's another fun tidbit from the same article:

Doctors are also now questioning the hygiene of TSA agents who conduct hundreds of patdowns daily. Although they wear gloves, it is being reported that viruses like syphilis, lice, gonorrhea, chlamydia, strep and papilloma viruses can be transferred from passenger to passenger during the body searches. Alarmed travellers have noted that the TSA agents do not change gloves in between patdowns and were actually patting down dozens of passengers or more wearing the same gloves.

And how about this one:

Privacy-invasion claims like Eliana Sutherland's have become increasingly common since the TSA introduced the full body scan. She complained that she was singled out by agents because of her large breasts. She said she was flying from Orlando International Airport and felt objectified by security workers, claiming two male TSA workers had been staring at her chest and picked her out for additional screening. "It was pretty obvious. One of the guys that was staring me up and down was the one who pulled me over," she said. "Not a comfortable feeling."

These two menu fails come from the same Japanese restaurant in Connecticut. 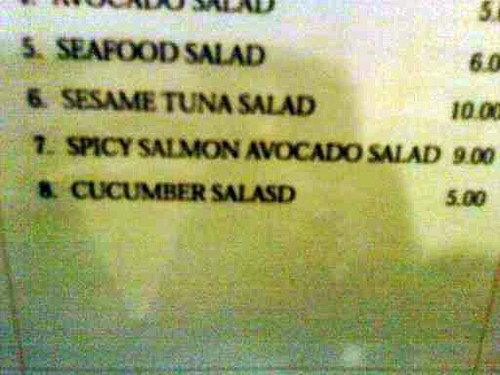 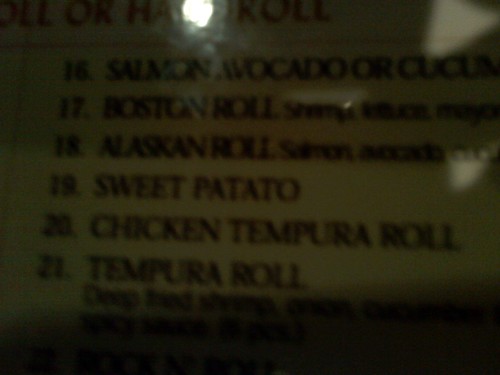 This one is harder to see, but #19 reads "Sweet Patato." Coincidentally, "sweet patato" is a traditional term of endearment in my family.
Collapse