One of my favorite horror movies ever is Roman Polanski's Rosemary's Baby. I know some people find it slow and talky, but for me it's right up there with The Shining, The Exorcist, and Psycho. Yet, oddly, I'd never read the book on which it was based. I recently came across a copy of Ira Levin's 1967 novel Rosemary's Baby and decided it was time to rectify this oversight.

While the novel is definitely a product of its time--sometimes embarrassingly so, such as when an elevator operator is referred to as a "Negro boy"--it holds up remarkably well. In a way I'm very happy that I saw the movie first because reading the novel both helps to shed light on certain unexplained events in the film (I had a similar experience when I finally read Arthur C. Clark's 2001: A Space Odyssey) and because the novel itself is very, very sneaky. Most of the plot points, including veiled threats and revelations that would otherwise set off alarm bells in a thriller, are buried in the dialogue in what often comes across as small talk or throwaway dream gibberish. In this way, Levin is very sneaky indeed. Had I not been familiar with the story already because of the film, I bet half of it would have slipped right past me.

Of course, being so familiar with the film also means I couldn't help picturing the inimitable Ruth Gordon as Minnie Castevet, and Mia Farrow as Rosemary Woodhouse. In fact, every time Rosemary tells other characters about her husband Guy's recent acting roles--"He was in Luther and Nobody Loves an Albatross"--I distinctly heard Farrow's voice reciting the line.

This is my first Levin novel, but it won't be my last. What an amazing writer. On a sentence by sentence level he can be kind of clunky, but he's a master of the word. He can nail a description with just one word in a way I've never seen before. Just one word and you know everything you need to know about a character. It's astounding. The novel is incredibly tight, too. It's no wonder it was made into a film. In fact, all his novels but one or two have been made into films, and after reading him this comes as no surprise.

In the same way the film of Rosemary's Baby is among my favorites, the novel too is now an instant favorite. A smooth, quick read, it's a truly special book, and one horror fans everywhere should treat themselves to. 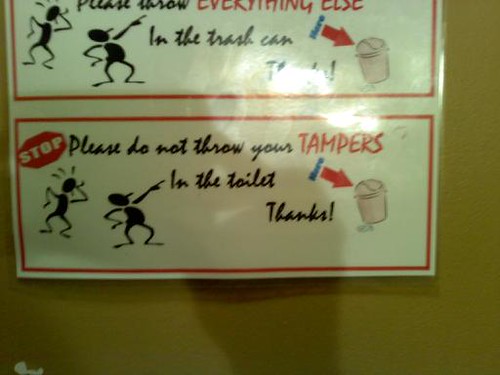 ...but they don't belong in the toilet!

Any ideas what they mean? Tampons? Pampers? Anyone?
Collapse