First, back in April, Arizona signed into law Senate Bill 1070, also known as the Support Our Law Enforcement and Safe Neighborhoods Act, which says, in part:

FOR ANY LAWFUL CONTACT MADE BY A LAW ENFORCEMENT OFFICIAL OR AGENCY OF THIS STATE OR A COUNTY, CITY, TOWN OR OTHER POLITICAL SUBDIVISION OF THIS STATE WHERE REASONABLE SUSPICION EXISTS THAT THE PERSON IS AN ALIEN WHO IS UNLAWFULLY PRESENT IN THE UNITED STATES, A REASONABLE ATTEMPT SHALL BE MADE WHEN PRACTICABLE, TO DETERMINE THE IMMIGRATION STATUS OF THE PERSON. THE PERSON'S IMMIGRATION STATUS SHALL BE VERIFIED WITH THE FEDERAL GOVERNMENT PURSUANT TO 8 UNITED STATES CODE SECTION 1373(c).

You might be able to see right away what was so egregious about this, but if not, it's that the law states "for any lawful contact made by a law enforcement official or agency." It says nothing about what that contact is, leaving open the door for officers or agents to walk the streets of the state, stop whoever they want, ask for papers proving US citizenship (and we all walk around with our Passports, don't we?) and detain the individual, even if they are in fact a citizen, should they not produce said papers. In early May, the bill was revised to specify that police may only question the immigration status of those they suspect of being in the country illegally during a lawful stop, detention or arrest, as opposed to just any old contact, though this change came only after enormous public pressure from both outside and inside the state.

And now, the principal of the Miller Valley Elementary School in Prescott, Arizona is ordering the faces of the children in a mural on the side of the school be "lightened" from their original darker tones. The principal says it has nothing to do with race, he just wants to make them look "brighter and happier," as if the children are "coming into the light." It's a purely artistic decision, he claims, despite the fact that the mural was drawn from photos of actual kids enrolled at the school. City Councilman Steve Blair, instead of calling the principal a moron, would rather the mural were removed altogether, complaining publicly on a Prescott radio program that the most prominent child in the mural isn't white.

Are you sensing a pattern here? I am.

I knew from the get-go that Chasing the Dragon would be available in the UK, but being over 4000 miles away from there frequently causes this fact to withdraw to the back of my mind. I have been wondering what the book's reception has been like across the Pond, but haven't heard from any UK readers. Until now, that is, when I stumbled upon this reader review at Amazon UK, from someone calling themselves "The Electric Ghost":

ENCORE!!! I dont remember what made me buy a book only 132 pages long, but I finished it wishing it were much longer though uncertain how it could be done without boring the reader with extraneous material. Many writers seem to be unable to produce a thriller in under 3-400 pages. But this is a cracking read and can be read in a day or two for the price of 2 visits to the movies; value enough. The plot is interesting, there are twists enough and the lead Georgina [sic] is likeable and believable. I would heartily recommend it.

Any other UK readers out there enjoying Chasing the Dragon should feel free to let me know! 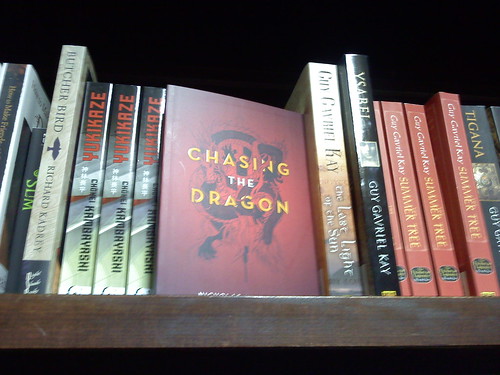 I signed their stock too, so if you're in the Union Square area and have a hankering for a signed copy of the paperback, head to B&N, take the escalator to the Science Fiction & Fantasy section on the top floor, reach allllllll the way up to that top shelf where you usually go for Guy Gavriel Kay books and nab yourself one!
Collapse