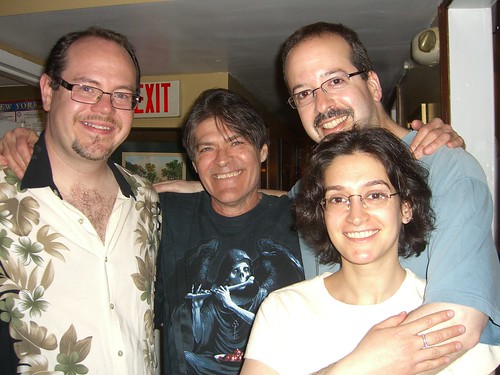 That's Jack Haringa, Jack Ketchum, me and Alexa Saturday night on the Upper West Side. Something always happens when Jack H. hits town and we go out drinking. Usually it's just scary drunk cougars hitting on us in karaoke bars, but this time someone took it further and tried to kill Jack with a car bomb in Times Square. (Attention terrorist: The submissions window for Jack Haringa Must Die! closed a long, long time ago!) We were there, right on that same exact street where the Pathfinder was found, when they started evacuating the area. Everyone's fine, as apparently the terrorist didn't know how to wire a bomb properly, and we proceeded to make our way uptown to join Jack Ketchum for a drink.

I love it when Jack H. visits NYC and wish he would do it more often--especially because we always wind up having delicious Korean and Japanese meals at restaurants I wouldn't usually go to--but maybe next time the car bombers will stay home.

Then, on Sunday, I hit the Brooklyn Botanical Garden's Sakura Matsuri Cherry Blossom Festival with Alexa and David Wellington. I thought it would be pretty, and maybe we'd hear some traditional Japanese music, but really it was just wall to wall cosplayers dressed in kimonos or as their favorite anime characters.

Ugh, another weak episode. In my opinion, between this and "The Beast Below," the promise of the fifth season's premiere, and of Matt Smith in the Doctor's role, remains unfulfilled. It's not all bad--Ian McNeice as Winston Churchill was a lot of fun, though at times he reminded me of Alan Rickman in Robin Hood: Prince of Thieves, having a ball in much better story than anything else on screen; the line "You do not require tea" was hilarious; the warplanes in space was wonderful spectacle--but ultimately this episode commits a cardinal sin. It's boring, and a Dalek story should never be boring.