The Hurt Locker. Precious. An Education. Every once in a great while a movie comes along that so fully explores the human condition and is so authentically acted that it becomes a transformative experience, not just drama but a mirror held up to our own lives, our own emotions. Movies that give us a chance to process our own experiences with a new understanding. In a good year, we get more than one such film, we get a handful.

So what won the Golden Globe for Best Drama on Sunday night? Avatar, a movie about giant blue aliens with cat faces riding space dragons and fighting space marines over a rare space element called Unobtainium.

There will now be a thirty-year moratorium on all articles, op-ed pieces and blog entries about how science fiction never gets any respect come awards time.

Last night, the gf and I had the pleasure of seeing the final dress rehearsal of the Gotham Chamber Opera's production of Joseph Haydn's Il Mondo della Luna ("The World on the Moon") at the Hayden Planetarium. What better setting for an opera that partially takes place on the moon?

Haydn's farcical opera tells the story of three suitors for the daughters (and maid) of a nobleman, Buonafede, who refuses to let them marry, no matter how in love these couples are. So, knowing Buonafede is a fan of astronomy, they trick him into thinking he's been transported to the moon by means of a magic potion, where the strange and wonderful moon people (his daughters, the maid and their suitors in disguise) tell him that on the moon women get to marry whomever they want. More wackiness ensues. Much funnier than I ever thought opera could be.

Here's a photo of the orchestra before the show began, and the blank dome of the planetarium behind them: 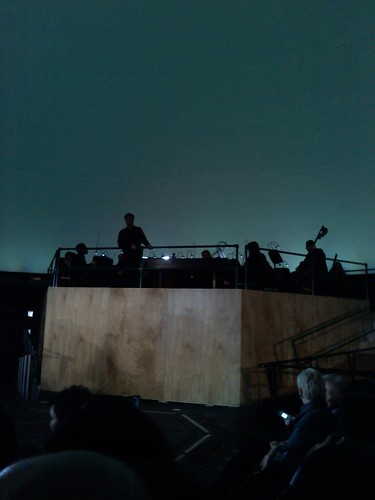 The dome was used to great effect during the production. Not only were the supertitles projected there so the audience can read in English what the performers are singing in Italian, but it was also used to project truly outstanding, psychedelic spacescapes during the moon sequences. Speaking of which, the moon costumes were hilarious. I wish I had a picture, but I didn't want to be that guy who whips out his camera phone during a live performance. And in a stroke of genius propmastering, even the planetarium's obsolete old Universarium, that globelike projector of Laser Floyd shows gone by, gets repurposed into the opera as one suitor's fake astronomy machine.

The whole production was marvelous, and I can't recommend it highly enough. Rumor has it the ten-day run is already sold out, but if you get a chance to see it, jump at it. Even if you think you don't like opera, this is one seriously fun show!

I'm beginning to learn that local supermarkets are the best for finding bizarre sign fails, like the one above. I imagine the writing process went something like this: "Should I write from Spain, or of Spain? Oh hell, I'll just write both to cover my bases! This is the manager's special, after all. I can't make the manager look like a halfwitted tool!"

Interestingly, this sign was gone a few days later and replaced with a grammatically correct one. Nice to see someone was on the ball. Eventually.

As stupid action adventure TV series go, Human Target, based on a DC comic book, isn't that bad, at least judging from Sunday night's premiere (the series will continue on Wednesday nights, starting tomorrow). There's running and jumping and gunplay and banter and wisecracking and things going all explodey. Basically, it's exactly what you think it is.

Mark "I was on every television show ever" Valley plays Christopher Chance, a bodyguard for hire who apparently has some kind of superhuman brain, seeing as how he knows everything the plot requires him to know, such as how monorails work, how to speak fluent Japanese dialects, and how to make a parachute out of a tarp and a couple of cut off seat belts. Chi "Does anyone remember Boston Public?" McBride plays Winston, Chance's business manager, and Jackie Earle "That's Freddy Krueger to you" Haley plays Guerrero, a sneaky criminal who's now using his sneakiness for the good guys. Insert a threat, hit blend, and you have your weekly episode.

Which makes it all the more surprising, I guess, that I liked the premiere as much as I did. The cast is fun, and that's half the battle for a series like this. I think I'm going to stick with this one for a while and see how it goes.