I finally saw Jesus Christ Superstar last night, courtesy of Norman Jewison's 1973 movie, and was quite upset to discover that the song I'd learned as a child was wrong and Jesus did not in fact have bulletproof underwear.

Saturday night, the gf and I saw Eddie Izzard perform live at Madison Square Garden. Not the most intimate of venues--suitable, I suppose, for a tour ironically titled "The Big Intimacy"--but the show was fantastic. Izzard was as hilarious as ever. The show was sort of a tour through history, from the dinosaurs to the modern age, as seen through Izzard's comedic lens. Great stuff.

I had no idea Izzard had such a huge following! Not only were there people in attendance with t-shirts printed with his most famous punchlines ("Cake or death!", "Beekeepers!"), but he sold out Madison Square Garden, not an easy feat for a comedian! Here's a shot of the crowd: 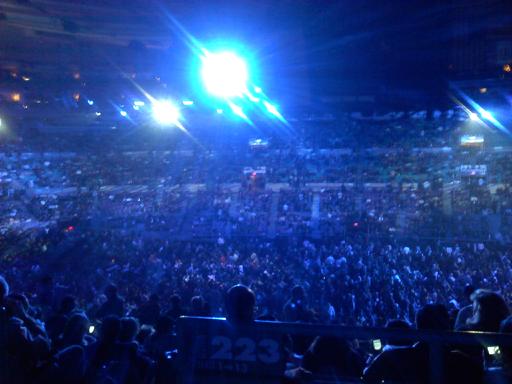 You can't see the stage in that shot, it's off to your right at one end of the floor, surrounded by Jumbotron screens. Before the show, and during the intermission--or the "interval," as he called it--those screens were set up as live Twitter feeds for Izzard fans around the world and in the audience: 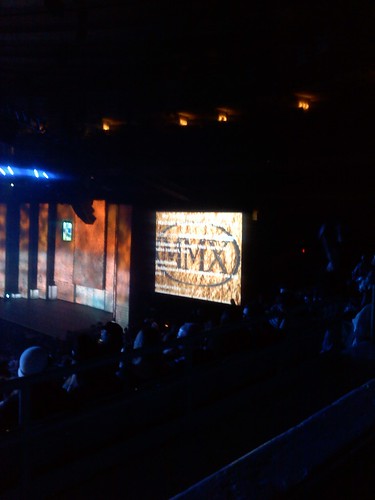 You can't really see the tweets in that picture, but that's okay because they were nowhere near as funny as the tweeters thought they were. That's because Twitter is lame. I thought everyone knew that, but apparently not.

Luckily, during the show the inane tweets went away and the screens were repurposed to give those of us in the nosebleed seats a chance to actually see Izzard's facial expressions, which is half the fun. Here's what Izzard actually looked like on stage from our seats: 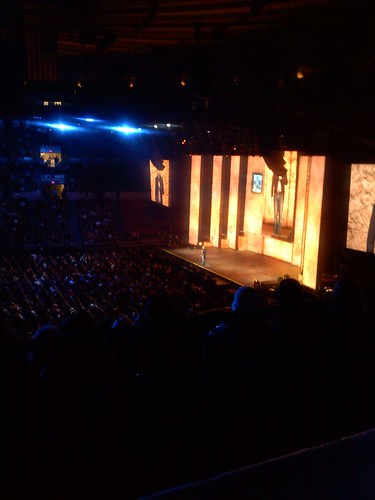 He's an ant! An ant! After a while, you can't help but focus on the screens instead of the man on stage, which makes it sort of like watching an Eddie Izzard special on TV with a hundred thousand of your closest friends, but the experience was still an amazing one. I've only seen a small handful of famous comedians live--Bill Cosby, Robin Williams and Brian Regan may be the only other ones--but it's totally worth it to be in the audience and feel the energy for yourself.

It was a great show, and it was great being there!
Collapse