Sometimes examples of much-needed proofreading can exist right under your nose for years before you notice them. Case in point, here is the 1986 VHS box for the Ray Harryhausen extravaganza Jason and the Argonauts*, which I've owned for decades: 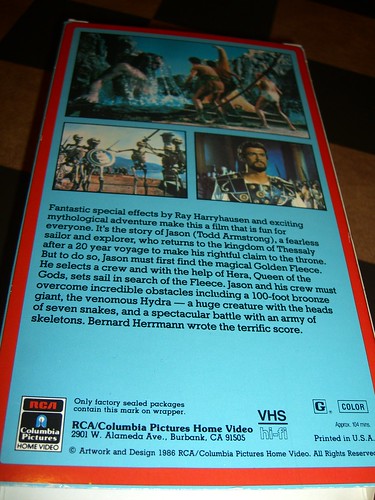 Look closer and you'll see a typo in the text that I hadn't noticed before, until my girlfriend caught it, four lines up from the bottom: 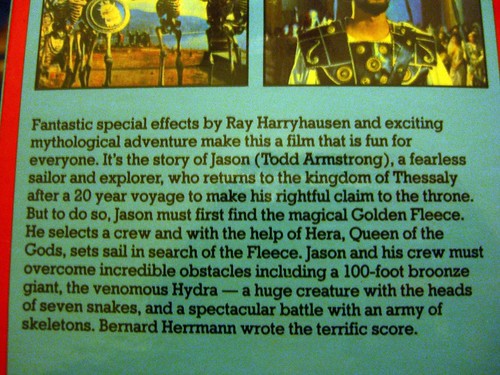 That's right, it's a "100-foot broonze giant"! I'm not sure what "broonze" is, but I'm guessing it's some kind of mixture of metal and alcohol. Way to go, RCA/Columbia Pictures Home Video! Remember, proofreading isn't just for internal memos and studio contracts anymore.


* Over the holiday, I showed my girlfriend two Harryhausen movies, The 7th Voyage of Sinbad, which isn't the best of the Sinbad movies in my opinion (that would be Golden Voyage) but does include the famous and awesome cyclops, and Jason, which she liked better and thinks she may have seen before. I also got to show her Psycho, which, to my surprise, she'd never seen before, and she loved it. She has good taste, even if she prefers Jason to Sinbad.

I read two short stories over the holiday weekend that I liked a lot and wanted to bring to your attention. Interestingly, both are science fiction stories written by authors I usually associate with horror fiction. Go figure, maybe it's the start of a trend!

The first is "Horses" by Livia Llewellyn, which appears in Postcripts #18: This Is the Summer of Love. Many of the people on my friends list know the author as the frequently sharp-witted

livia_llewellyn, but they may not know she's quite a talented writer of horror and dark fantasy too. Her story in the anthology Unspeakable Horror was one of the best of the bunch, and her entry in the Field Guide to Surreal Botany was one of the few truly scary ones. "Horses" is a science fiction story about, among other things, nuclear armageddon in the near future and the protagonist's attempt to survive it in an underground bunker, but the dark, nihilistic atmosphere remains reminiscent of the finest horror stories. And like many horror stories, at the end it leaves you feeling unsettled and icky. It helps keep the reader on his or her toes that the story's protagonist, Kingston, is depressed and possibly psychotic. But then again, everyone probably would be after a nuclear war. Kingston does some seriously questionable things, many of which result in other people's deaths, but Llewellyn is a strong enough writer that even if you hate Kingston, you empathize with her right to the end.

The other story is "Dreaming Robot Monster" by Mort Castle, which appears in the anthology Mighty Unclean. I know a number of you who read this blog are familiar with Castle's work, but some of you may not be and that needs to be rectified now. Aside from my personal connection with Castle--he was my unofficial writing mentor when I was just starting out, and I got to pen an appreciation of him for the World Horror Convention 2005 program book--he is a writer I truly admire (his book Moon On the Water is one of the best story collections of the past decade, in my opinion) and one I hope someday to be half as good as. "Dreaming Robot Monster" is the latest in a series of stories Castle has been coaxing from various cultural touchstones, often drawing upon real-life historical figures, as he did with Hemingway in the story "The Old Man and the Dead," or utilizing thinly disguised versions of well known literary characters, as with Lennie Small in "As Others See Us." Now he turns his sights on one of the greatest B-movies of all time, Robot Monster, and gives us a phantasmagorical backstory to what the film shows us. He puts us in the point of view of all the characters, including the robot monster itself, and ends on such a sweet note of yearning and affection that it makes you want to read the whole thing over again the moment you finish it. It almost makes you want to suffer through Robot Monster again too, just to compare the two.

Both Livia Llewellyn and Mort Castle are excellent writers well worth your time, and if you haven't experienced their work yet, these two stories make fine introductions. Were I in a place to do so, I would, without hesitation, recommend both stories for various horror and science fiction awards consideration. Here's hoping others will.
Collapse