In my ongoing quest to find funny misspellings on menus and signs, I sometimes come across ones that are still amusing but could have been a lot worse. Case in point: 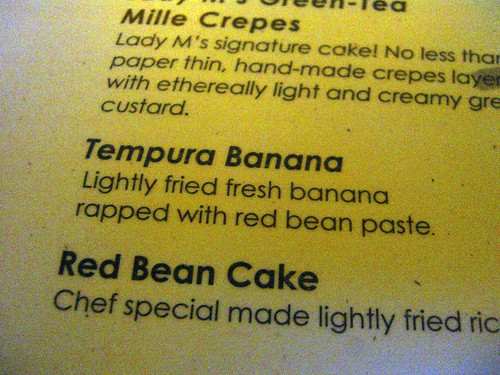 Tempura banana "rapped" with red bean paste. I suppose that means they had a casual conversation in the school hallway, or maybe on a street corner.

But as I said it could have been a lot worse, as many of the illiterate and incredibly unfortunate holiday season misspellings all over Lamebook can attest--"Grandma's downstairs raping the presents!"--but "rapped" is still pretty bad. I mean, they managed to spell "ethereally" right in the item above the Tempura Banana, and "ethereally" is like ten times harder than "wrapped"! WHOSE RESPONSIBLE THIS?
Collapse