THE FINAL CHAPTER
by Nicholas Kaufmann

Brian Keene looked up at the mansion before him, a five-story gothic monstrosity of impossible angles and malevolent, eyelike windows, which stood at the end of a mist-shrouded New England lane. This, he knew, was the home of Shawn Bagley, the keeper of a library full of many a quaint and curious volume of forgotten lore in the form of small press limited edition hardcovers, a man whose inhumanly long beard, it had been said, was a separate, living organism in its own right, one that, when the stars were aligned, responded to the name Loki.

Shawn met him at the door, and without a word he ushered Brian into his library. They sat across from each other at a round table draped with a heavy cloth that was etched, Brian noticed, with strange and eerie symbols. Tall, wrought iron candelabras flickered and guttered in the corners of the room, casting misshapen shadows that danced like madmen on the walls.

Brian put his briefcase down on the table between them. A short chain led from the clasp around its handle to the cuff around his wrist. "This is it," he announced. "This is what I called you about, Shawn. The missing final chapter of The Rising."

Shawn shook his head in bewilderment. Brian tried not to notice that his beard seemed to move independently of the rest of his head. "i don't understand," Shawn replied, speaking only in lower case letters because that was his way. "didn't you simply pick up where you left off with the first chapter of the sequel, city of the dead?"

Brian sighed heavily. "That's what I wanted people to think, but it's not the truth. This," he patted the briefcase, "is the real one. The true final chapter."

"please," Shawn said, his voice a breathy whisper. "i must see it. this is even rarer than a Vox 13 book, and will no doubt have fewer typos."

Brian shook his head. "I don't know, Shawn. Are you sure you can handle it? This chapter, it...does things to people. Everyone who's read it has transformed into something terrible. That's why I couldn't allow it to be published. Something about these words in this particular order has unleashed an unnatural evil!"

Brian unlocked the chain that held the briefcase to his wrist, then slowly opened the briefcase and pulled out a stack of papers. "You're sure?" he pressed.

"the chapter!" Shawn insisted, his eyes glistening with an eager madness.

Brian sighed and slid the pages across the table to him. Shawn began to pore over them immediately. "no," he moaned, shaking his head in disbelief, his beard twisting in despair. "no, it can't be!" He clawed at his own face in terror. "red death! red death! aaaaaiiiiiieeeeee!" His head dipped suddenly to his chest, as if he'd lost consciousness, but a moment later it lifted again. Blood streamed from his eyes. His skin was pale, sallow. Dead.

"Oh fuck, not you too!" Brian exclaimed.

The thing that had been Shawn Bagley laughed maniacally as Brian leapt from his chair and tried to run from the room. Ropey strands of Shawn's beard sprang from his face like tentacles and wrapped around Brian's body. Brian stumbled as the unbreakable fibers dragged him back into Shawn's clutches.

"red death! red death!" the thing inside of Shawn's dead husk chittered. He sank his teeth deep into Brian's neck, tearing out a chunk of bleeding flesh. "remember this, keene," he said as the blood dribbled down his chin and was absorbed into his writhing beard. "'twas the unreasonable demands of your own readers that drove you to your end!"

Shawn took another bite, and Brian, in agony, felt his life draining away from him. As it did, he felt another force entering his body, something dark and alien. Brian Keene died in Shawn's library that night, but he didn't stay dead for long. Moments later, he opened his eyes again, no longer himself but instead a creature that existed in the nebulous realm somewhere between the living and the dead.

The thing that was once Brian Keene ran from the mansion with Shawn Bagley's dark laughter echoing at his heels. He ran through the city, and everyone he met, he bit. On some level, in what was left of the living Brian's mind, he sensed an irony in this. Usually, it was the opposite that occurred--everyone he met, he told to bite him. But with each new victim, the plague spread, and this pleased the undead Brian Keene greatly. Each victim would rise and bite more people, and the new ones would bite even more, until all of humanity was dead and transformed.

The dark entity that inhabited Brian's body knew what he had to. He just needed to find a quiet place to do it. And soon, at a cemetery on the edge of town, he did. A quiet and most fitting place to begin his work.

The dead scrabbled for an entrance to his grave. His publishers were among them, as ravenous for Brian in death as they'd been in life. Their faint, soulless cries drifted down through ten feet of soil and rock.

Deep in his underground bunker, Brian laughed to himself and typed the novel into his computer. It would be a new book in the Rising universe, one filled entirely with the dark, diabolical words that the living Brian had accidentally stumbled across, so that the plague of the living dead would spread throughout his fandom, and ultimately throughout the entire world.

He typed and laughed, and laughed and typed. Preorders for the book were announced fourteen seconds after he printed up the manuscript, and the initial print run was sold out twenty-seven seconds after that. The book was published the next day, exactly as he had written it. Simultaneously, all over the world, it was opened and read by eyes that ran red with blood.

And Darkness and Decay and the undead Brian Keene held illimitable dominion over all.

Happy Kill Brian Keene In Your Blog Day! If you liked this story, or any of the others you'll find floating around the blogosphere today, please consider donating to the Shirley Jackson Awards, an independent literary award that focuses on horror, suspense and other dark fiction: http://www.shirleyjacksonawards.org/sja_support.php Your donations will help keep the SJA going. Thank you!

And be sure to check Brian Keene's blog for an updated list of his untimely demises all over the Internet.

This had to be one of the best Halloweens ever.

Friday, the night before Halloween, my girlfriend and I went to the Halloween Extravaganza at St. John the Divine. My friend

dbraum has been telling me for years about how awesome this event is, and after seeing it for myself, I can only lament that I waited so long to go. Now it's going to be a part of my annual Halloween tradition!

At the Halloween Extravaganza, the enormous cathedral of St. John the Divine is lit up inside with colored lights and filled with an eerie, machine-made fog. We took our seats an hour before showtime, right near the front, as the sold-out crowd filed in. Then, at seven o'clock (and presumably again at the ten o'clock show), the lights went out and the first notes of Bach's Toccata & Fugure in D Minor rang out on the cathedral's immense pipe organ. (You know the music I'm talking about; it's what every mad scientist plays on his home pipe organ.)

Then they showed the film Nosferatu on a big screen hanging above the altar, with live accompaniment on that same pipe organ. It was a stunning, fully immersive experience. (It was also an edit of the film I'd never seen before, cut down to about an hour and with its title cards altered to change Count Orlock's name to Count Dracula.)

After the movie came the real highlight of the evening: The Procession of Ghouls! These were actors and puppeteers in amazing creature costumes by Ralph Lee, and they came out of a fog-shrouded opening at the altar and walked, crept, floated and lurched down the aisle through the audience. It was simply wonderful! I can't wait to go back next year. I think they're showing either The Phantom of the Opera or Dr. Jekyll and Mr. Hyde.

Saturday, we went to Sarah Langan and J.T. Petty's Halloween bash. Sarah had to put her costume together last minute, so she went as Betty Draper from Mad Men. J.T., by sheer coincidence, was dressed as Count Orlock from Nosferatu and looked incredible. Like last year, when he dressed as Travis Bickle from Taxi Driver, J.T. fully committed to the role, actually shaving his head bald just like Max Schreck, then applying white face paint, pointy ears and rat fangs. My girlfriend and I went as Little Red Riding Hood and the Big Bad Wolf. Or rather, the hipster versions of them. She wore a red hoodie from Old Navy, and I, well, this was me: 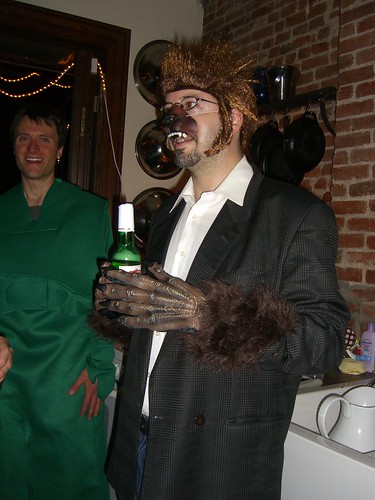 The Big Bad Hipster Wolf! (The fellow behind me was dressed as Gumby, but is seen here without his big Gumby head.) Our friend David Wellington also came to the party. He wore a doctor's coat with a bloody handprint on it and a name tag that said "Death Panel Administrator." But the best costume of the night goes to the guy who came in full, authentic Tusken Raider getup. This dude knows his Star Wars!

Best Halloween ever. Now I'm sad that it's over and I have to wait a whole year for it to come around again. It really is my favorite holiday.
Collapse