Last night, my friend David Wellington and I returned to Blood Manor, which bills itself as New York City's premier haunted attraction, for the fourth year in a row. It's always a fun time having struggling NYU actors in ghoulish costumes jump out at you from dark corners or chase you around with a chainsaw, but this year it was even more fun because I brought my new camera phone!

Some of the ghouls come out and entertain the crowd while you're waiting to get inside. 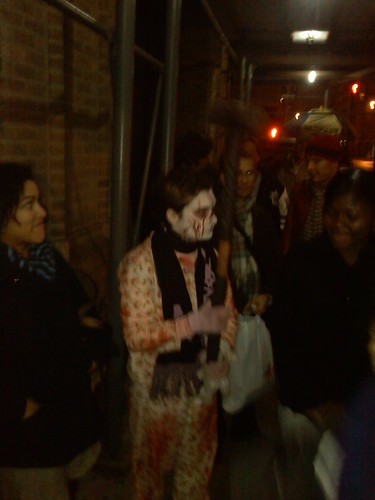 I call this one the "pajama ghoul." She wandered around in her blood-soaked pajamas and banged on the scaffolding with her hatchet for attention. Drama major! 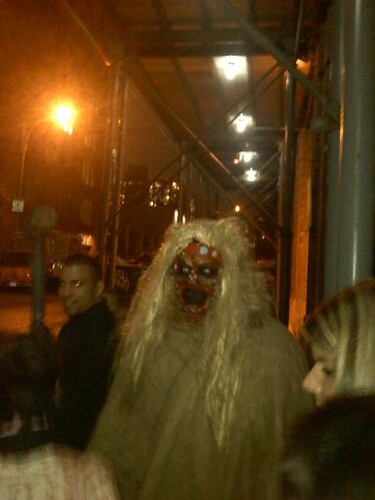 I don't know what to call this guy other than awesome. The camera can't capture all the detail of his costume, but he had awesome colored contact lenses, big red monster hands and feet, and very Darth Maul makeup. 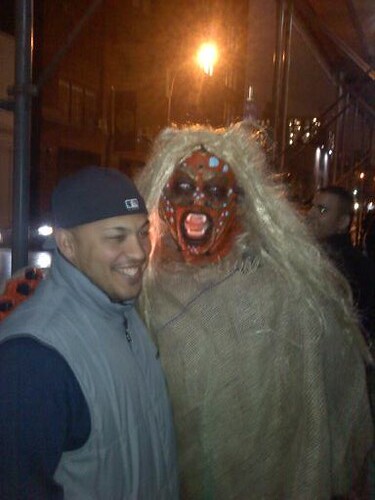 Here's Mr. Awesome mugging for the camera with a guy that was in line ahead of us. His fangs were very cool. 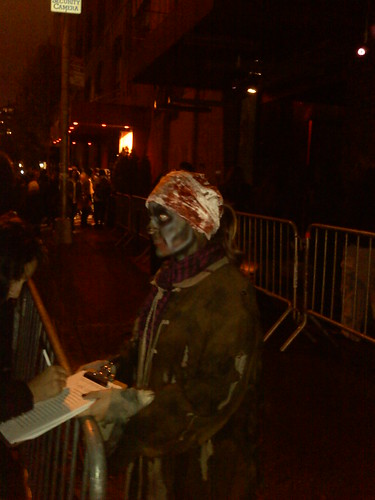 I call this one "zombie with mailing list." Our poor undead friend with obvious head trauma made her way down the line getting people to sign up for the Blood Manor email list. She was actually very sweet.

I wish I could have gotten a picture of the scary mutant on stilts, but he didn't stick around long enough.

You're not allowed to take photos inside Blood Manor, unfortunately, or I could show you all the cool costumes and sets. But it's better to leave that a surprise for anyone who's planning to go anyway. Still, I can share this one anecdote with you.

It was cold and rainy last night, so I wore a long coat and a tan, cashmere scarf. In one of the hallways inside Blood Manor, a demonic clown stopped me, looked me up and down, and sneered at my outfit.

"Where did you get that, the Men's Wearhouse or something?"

"More like the Men's Scarehouse!" I replied, because if there was ever a proper time to use macabre puns, I figure being at Blood Manor is it.

The demonic clown groaned and said, "Yeah, whatever," before moving on.

Blood Manor, ladies and gentlemen! Even the demonic clowns are no match for the comedy stylings of Nick Kaufmann!
Collapse