Just a reminder: today (Tuesday) at 5:30 P.M. (or 5 P.M. if you want to network with coffee first--and who DOESN'T?!) I'll be a panelist at the Foundation Center's "Getting Published: A Forum for Writers." Joining me will be playwright Arlene Hutton (The Nibroc Trilogy) and author Deborah Ludwig (Rebirth: A Leukemia Survivor's Journal of Healing during Chemotherapy, Bone Marrow Transplant, and Recovery), with the inimitable Joey Guastella moderating.

Joey tells me that as of Friday afternoon more than 90 people have signed up for this free event. There might still be some room left, though, so if it sounds like your cup of tea, you can use the registration form on the page I linked to above.

Once again, here's the info:

Here's looking forward to dozens of questions about how to write a query letter. Luckily, I know exactly what to tell them not to do!

Sunday was my friend Mary's birthday party and pumpkin carving contest. My girlfriend and I joined up with two other friends and took on approximately ten other carving teams. We didn't know what to fashion our pumpkin into, and in the end decided to carve the Illuminati pyramid found on the backs of one dollar bills.

Here's how it came out: 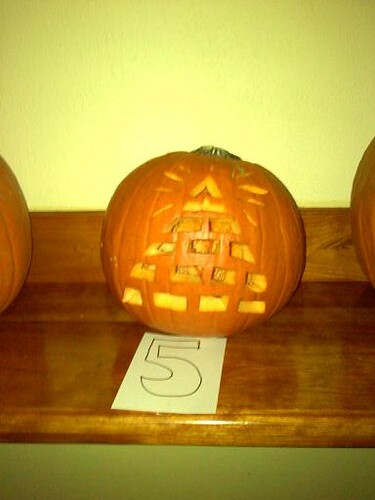 And here it is lit by candles: 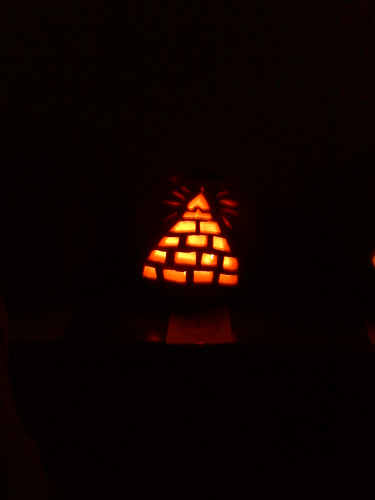 Unfortunately, we didn't win the contest, which was only fitting because there were plenty of other very cool pumpkins in the running. 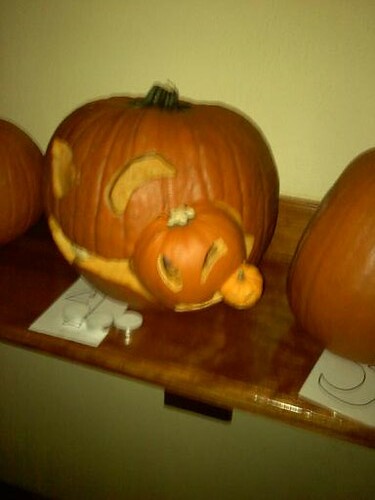 This is the third place winner, which I like to call Pumpkin Eating Pumpkin Eating Pumpkin. You can tell a lot of work went into it, and it looked even more impressive up close and in person. You can't really tell from this picture, but the biggest pumpkin has two front teeth fashioned out of white pumpkin, and the smallest pumpkin has a great expression of annoyance and pain on its face. 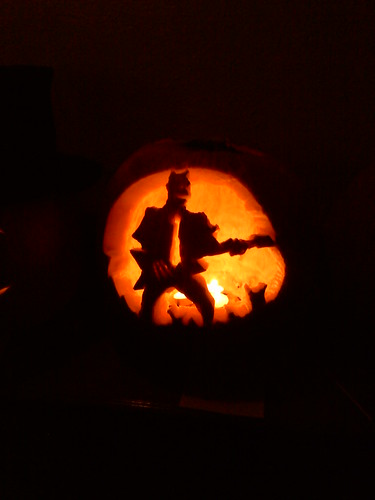 This is another of my favorites, and it came in second place. I love the use of negative space. Before it was lit, I didn't even know what it was supposed to be! Then, like staring at one of those Magic Eye posters, I finally saw the guitar rocker in the middle. I love all the little details like the musician's tie and a fan throwing the horns in the bottom right corner. 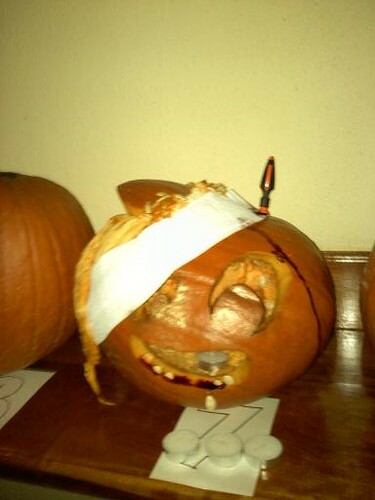 This grievously wounded, unfortunate pumpkin took first place. Sadly, my camera phone can't really capture all the wonderful details in this one, like the texture of the pumpkin pulp coming out of its head or the missing, bloody teeth, but it was awesome in person. I believe that's a pen coming out of its head.

I think next year we need to plan in advance!

Although the credited author is Hunt, the novel was actually written by horror and adventure writer Nicholas Kaufmann. The literary conceit of crediting the (fictional) star of the novel as its author is just one of the many fun things about this adventure series. The story in this third installment is a lot of fun, too: Hunt, the Colt revolver-toting, globe-trotting, treasure-seeking adventurer, must track down three lost jewels before they are used by a Hittite cult to assemble a devastatingly deadly weapon. The book is written in the very best pulp style: it's set in the present day, but it feels like something right out of the 1930's or 40's (readers familiar with the Doc Savage novels will know exactly what to expect). Similarities to the Indiana Jones movies are surely not coincidental, but the Hunt novels stand on their own two feet. Fans of pulp fiction, adventure novels, and just plain good times should consider this a must-read.

Only 7 more days before Hunt at World's End officially hits the bookstore shelves!

I got home this afternoon from picking up my new, tailored suit--go to Syms, it's cheap and awesome!--to discover UPS had delivered a box o' goodness: 25 copies of Hunt at World's End! Holding the actual book in my hand, seeing their spines all in a row like that, it made me so happy.

It's been an amazing ride of firsts so far. My first published novel. My first appearance in mass market paperback. My first reviews in Publishers Weekly and Booklist. And soon, my first book to be available in regular brick-and-mortar bookstores all around the country. What a sweet, sweet feeling. 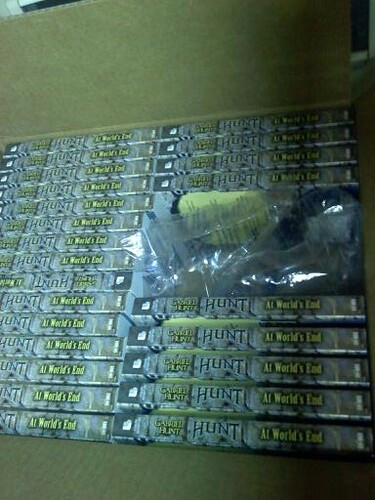 Also, tonight's publishing panel at the Foundation Center was an amazing experience. 113 people registered, and the room was filled practically to capacity. My fellow panelists Arlene Hutton and Deborah Ludwig were both knowledgeable and delightful, and Joey Guastella was the consummate professional moderator. There were a lot of the usual questions--"Are agents important?", "Should I self-publish?", "What's the best way to get an agent or editor's attention?"--but we had fun with it and the audience members seemed to appreciate our answers. A lot of people came up to me afterward to thank me, which was really nice because usually at these things I feel like a mushmouth who's hemming and hawing his way through everything. It was a good bunch of people, and I hope I was able to answer their questions. A lot of it's really just common sense, but sometimes writers get so caught up in their heads they think there's some kind of magical key they don't know about that unlocks the door of publishing success. (That's why everyone sweats the cover/query letter at first; they forget it's just a business letter like any other.)

I tried to be funny too, but I think a lot of my jokes fell flat because there wasn't much laughter in the room. Well, except for one line, where I mentioned that I don't like internet message boards because I find most of the people there monstrous. That one got a big laugh. I guess I'm not alone in feeling that way.
Collapse