Waiting for me in my email Inbox this morning was a bit of spam titled "Forty & Single." It was for some kind of dating service for people over 40.

It's like they were just waiting to send it. Finger poised over the mouse button, ready to click Send, for days now. "Is he forty yet? Is he forty yet? Oh, he turns forty today? SEND!"

In other news, I drank so much wine at my boss' cocktail party last night that when I left his apartment I literally could not see straight. You know that sloppy drunk guy who stumbles down the sidewalk, stiff-legged and weaving, his jaw hanging loosely open as he stares in wonder and confusion at everything around him? Last night that was me. I have only vague memories of getting home. Thank god my body has a good Autopilot system for just these occasions!

I woke up this morning in so much grumbly discomfort that I was unsure if I was hung over or still drunk. The answer to that question still eludes me, but drinking three cups of coffee has helped a little. There's a lot less room spinning going on now.

I don't know how I'm going to handle my birthday party tonight. The idea of drinking more makes me woozy. 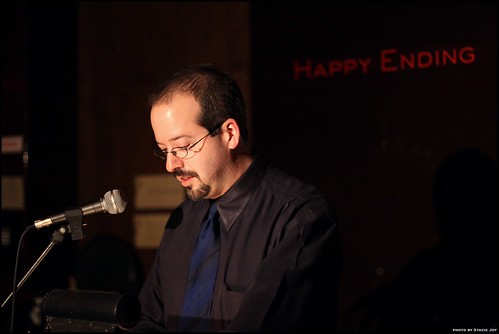 Thursday night's reading at the Happy Ending Lounge was spectacular. The place, a very cute club on Broome Street, was filled to capacity. In fact, there were so many erotica enthusiasts there they had to open up the downstairs and pipe the sound in!

It was wonderful finally getting to meet Susie Bright in person, as well as Rachel Kramer Bussell, the MC of the In the Flesh reading series, and my fellow readers Maxim Jakubowski, Paula Bomer, Ernie Conrick (whose story "Golden Hemorrhoids" was both hilarious and gross!), Martha Garvey, Tsaurah Litzky, Marcelle Manhattan (who wins my award for hottest story of the night--thank god I wasn't wearing sweatpants or I'd have pitched a tent!), Lisa Montanarelli and Chelsea Summers.

Some friends came by to hear me read, which made it even more fun. I haven't done a reading in a long time, especially one to a packed house, so I left there feeling like a million bucks.

The videos of our readings will be up in a couple of weeks. I'll be sure to point you in their direction when they're ready. In the meantime, you can see Stacie Joy's pictures of the event here.
Collapse