Here's what I came away with after tonight's annual White Elephant Party: 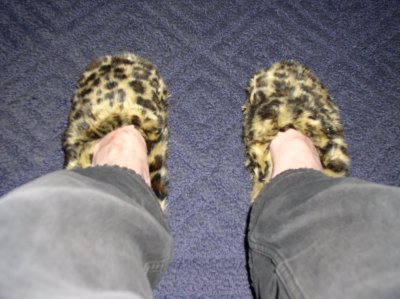 Furry leopard-print slippers! Awwww yeah! Why would anyone give them up?

Back in April of '08, I had the pleasure of giving a presentation before the Garden State Horror Writers on the topic of using your blog to build readership (and make friends and influence people!). While there, I met a very nice chap, an English expat named Jon Gibbs. Well, Mr. Gibbs contacted me recently asking if I could do him the favor of posting information about an organization he's starting up, which I'm happy to do:

A place where local writers can team up with each other to take part in multi-author book signings. Open to New Jersey authors of any genre, including those who are self-published.

You'll notice he's making a special invitation to self-published authors, which is not something I would necessarily have recommended, but it's not my decision to make.*

Still, if you live in New Jersey, or the New Jersey area (they're open to New Yorkers, for instance), and would like to participate in the multi-author book signings they'll be setting up around the Garden State, this might interest you.


* The ancient and honorable tradition of self-publishing as done by Twain, Blake and Dumas is long dead. Self-publishing today is only viable for books (especially specialized non-fiction) by authors with large, pre-existing platforms through which they can sell those books. When it comes to the modern self-published novelist, more often than not we're talking about raging egoists who refuse to admit they haven't learned how to write well yet, and that's why I don't like working with them. Your mileage, of course, may vary.

bev_vincent I got a sneak peek at the most recent Doctor Who Christmas Special, "The Next Doctor," which hasn't aired yet here in the States.

No spoilers here, but I will say this: You get to see the face of every single actor who has ever played The Doctor, and I have big nerd-love for whenever they do that!
Collapse