Happy New Year, everyone! I'm just back from a party at

awv2006's apartment in Park Slope, where much champagne and beer were flowing and a good time was had by all.

I hear Zombie Dick Clark crawled out of his sepulcher again this year to appear on television, but I didn't see it. We were tuned to CNN instead, where Anderson Cooper seemed alternately amused by and disgusted with his co-host Kathy Griffin. Why Kathy Griffin was on CNN with a respected newsman like Anderson Cooper is a mystery whose answer man is not meant to know. Unfortunately they forgot to show the final ten seconds countdown on the screen as the ball was dropping, so we had to guess and everyone was shouting different numbers and I was trying to remind everyone of this year's leap second, and then the next thing I knew it was 2009. Go figure.

I'm not the type for New Year's resolutions, nor for posting end-of-year writing stats (I can think of nothing more boring for my blog readers than a list of how many submissions I sent and rejections I received over the past twelve months). However, I'm all for wishing all of you the very best in 2009. Much health, happiness and success in all your endeavors.

And of course here's hoping the economy rebounds as quickly as possible. 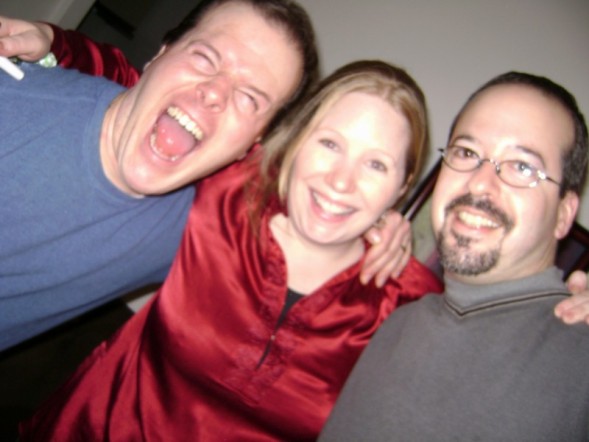 I nabbed a few photos from last night's party off of

nittergrl's Snapfish account and stuck 'em up on my Flickr. You can see the whole set here. Things get a bit out of control toward the end, what with the the crazy dancing and spontaneous kung fu fighting, but it was a great night.

One of my more peculiar obsessions over the better part of the past decade is to keep a list of the books I've read each year (one of the few things I use Excel for at home). I'm not sure it's of interest to anyone but myself, but I do like to post the list here every year. You can find 2008's list after the cut, presented in the order in which I read them. As always, the list includes books, chapbooks and graphic novel trade collections, but not short stories, magazine issues or individual comics issues (of which I read more in 2008 than usual, actually). I'm pleased to see I managed to put away 28 books, much closer to my goal of 30 than I have been in the past few years, when my reading time was cut in half by my wacky work schedule at the video store and lack of train commute.