One of the projects I've been working on is editing a secret anthology with quite an impressive lineup of authors. And now that it's all done and ready to go, I can announce here, with pride, the publication of Jack Haringa Must Die!: Twenty-Eight Original Tales of Madness, Terror and Strictly Grammatical Murder from Merricat Publications! 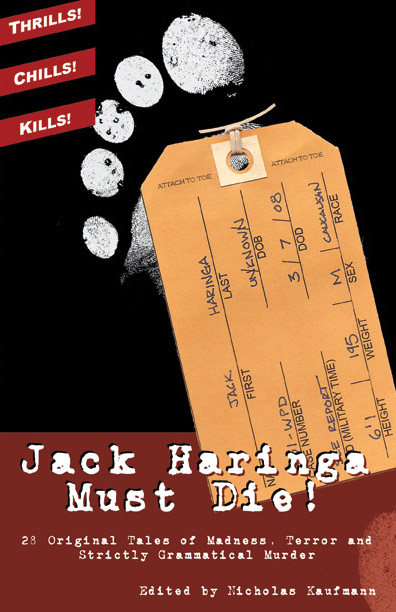 Jack Haringa Must Die! is a benefit anthology to raise funds for the Shirley Jackson Awards (hence the name Merricat Publications). It collects the best of March's "Kill Jack Haringa in Your Blog Day," as well as two never-before-seen tales of Haringa mayhem by James A. Moore and Christopher Golden.

Here is the full table of contents:

It was really hard choosing the best of the blog entries, since they were all so good. I wish I could have used them all -- even the ones with rights issues, like the one that had the Muppets killing Jack, or the one with the Punisher!

The book costs $10 and is available via Amazon.com and also directly from the Shirley Jackson Awards right here. If you'd like a copy, please consider ordering it direct rather than from Amazon, as the Shirley Jackson Awards gets a bigger cut of the money that way. They're looking into putting a PayPal link on the site as well for easier ordering, but in the meantime, don't be afraid to use the provided email address instead to let them know how many copies you'd like, where to send them, etc.

Copies will also be available this summer at Readercon, which is hosting the Shirley Jackson Awards, and at Necon, where Jack Haringa himself will rise from the dead to sign it for you.

(I got a nice taste for anthology editing from this project, by the way. Maybe I'll do another one sometime. One that actually pays and has all original content.)
Collapse