At Trivia Night tonight, my team, the two-time reigning champion Team Totally Tits, came in third. Poop. At least a really good team beat us this time, the Steve McQueens. They know their stuff and are worthy adversaries indeed. In fact, they're two-time winners now also. We should get a special lounge.

We did great on a couple of the rounds, including Board Games (I was the only one who knew which character from Dark Shadows had a board game -- Barnabus Collins -- because I was the only one there who knew what the hell Dark Shadows was!) and Rock (question: "Where did Iron Man get turned to steel in the Black Sabbath song?" answer: "In the great magnetic field."). We also did pretty well on the round where we had to identify 40 different car logos. In fact, we were in first place for a while.

But what tripped us up was the audio round at the end. We were supposed to identify Beatles songs for 1 point and the albums they appeared on for 4 more points. Shouldn't be too hard, right? So Pascal, one of the hosts, puts on the first clip. What comes out of the speakers is dissonant gibberish. Pascal pauses it and says, "Oh yeah, did I forget to mention we're playing the songs...backwards?"

Still, we got more answers correct than we ought to have under the circumstances, getting 29 points out of a possible 60, but the Steve McQueens somehow managed a perfect score. Bastards! We must return on Monday, April 14 to try to regain the trophy!

Received this in the mail yesterday from 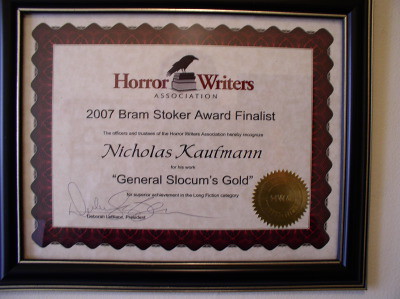 Today was "itemize my 2007 tax receipts" day. Can you hear the excitement in my voice?

I discovered I spent $286.36 on DVDs last year but only $68.55 on books, and then realized I myself embody everything I hate about the average American entertainment consumer. I am my own worst enemy -- and yours!
Collapse