It's the biggest primary day in U.S. history today, with more than twenty states (including mine) voting at the same time. First they called it Super Tuesday. Then they called it Super Duper Tuesday, because evidently the news media isn't already enough like a hyperactive child rolling on the living room rug shouting inanities at no one in particular.

But still, it's historic in its magnitude. As I said before, it really is as if everyone can't wait to be rid of the current administration. If they could move the general election up to March and the inauguration to April, they would.

I voted this morning at my local public school. There weren't a lot of voters there and the staff looked bored, but I went on an off-hour. I suspect the after-work crowds will be pretty big.

What's amazing -- to me, at least -- is how conventional wisdom keeps getting proved wrong. Conventional wisdom said people wouldn't vote for a woman or a black man, and yet the Democrats are now left with only Hillary Clinton and Barack Obama to choose from (not counting Mike Gravel because, well, nobody's counting Mike Gravel). Conventional wisdom said the Christian Conservative bloc of the Republicans would reject Mitt Romney because of his crazy Mormon religion, but they seem to be backing him over Mike Huckabee, who was a Southern Baptist pastor once upon a time. It's pretty amazing to see. (My mother is one of the people who thinks America isn't ready for a black president, though it is ready for a female one. I told her if enough people pull the Obama lever, POOF! America is ready.)

So go vote if your state is a part of Super (Duper?) Tuesday. Vote your heart and your conscience. Vote for who you want, not just for who you think would best beat the likely nominee of the opposite party. You'll feel better about yourself in the morning. 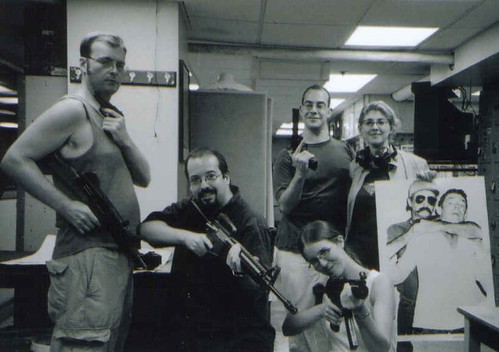 Not everyone knows about my history as a TV actor, so I thought I'd post this publicity still from the unaired pilot Metal Squad 5. That's me kneeling in the middle. I played Butch "Steel" McCallahan, a loose-cannon cop who doesn't play by the rules but still has a strong moral center. The show was eventually picked up in Japan, but I was replaced by a teenage girl in a school uniform.
Collapse