I think I'm done with Prison Break. What started out as a smart, twisty show about a genius trying to break himself and his brother out of a jail he helped design has become, in its second season, a ridiculous cartoon of pointless cliffhangers, unbelievable double-crosses, nonsensical twists dictated by the need for plot beats, random character culls, and way too many instances of Omniscient Protagonist Syndrome.

The show jumped the shark as soon as they got out of prison, and now it's as if the writers don't know what to do so they cram each episode with chase scenes and empty plot devices and hope something pops enough to give them an arc for the rest of the season. Feh. Goodbye, Prison Break. It's over between us.

The annual SFWA Authors & Editors reception was held last night in Manhattan, and it was a blast. It was great to see so many familiar, friendly faces, even if I did just see many of them in Austin a few weeks ago. But they're a great group, and I always enjoy hanging out with them (and meeting more of them each time), whether it's at a convention, the KGB Bar readings or events like this one.

Here's me at the party: 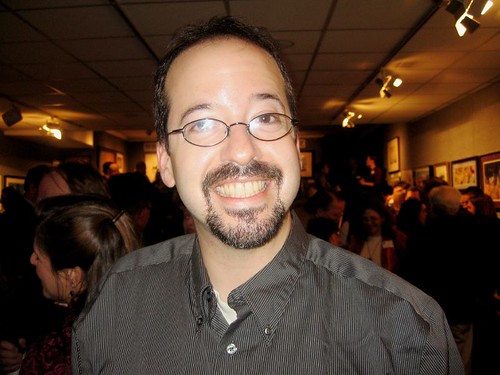 The picture as taken early in the evening, and I know I look drunk already, but I wasn't. Just mugging for the camera as usual. I gotta try not to do that anymore.

(Photo is courtesy of Ellen Datlow. You can see the rest of her pictures from the reception here.)
Collapse