Here's a picture of me at last week's Bill Shunn and Elizabeth Bear reading at the KGB Bar, courtesy of host Ellen Datlow and her magical digital camera that only ever catches me when I've got my crazy face on. Stop the insanity! 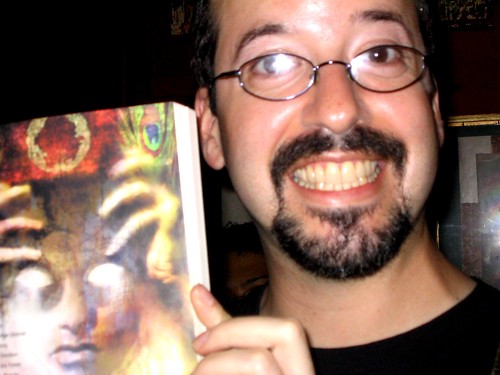 I'm holding the copy of Vanishing Acts that

laurie_daniels gave me for my birthday. I brought it along for signatures because it's got a story by

shunn and it's edited by Ellen. I'm such a suck-up!

(The rest of Ellen's pictures from the reading can be found here.)

I just bought my membership to next year's World Horror Convention in Toronto. Normally I try to buy during the same calendar year the convention is held - for tax purposes, so I'm not deducting for the same convention twice in one year - but I didn't want the membership price to get any higher than it already had.

Toronto's a fun town, and I'll get to see all my Canadian friends. It'll be like MarcyCon all over again, except bigger and with less Swiffering. Also, they're holding the Bram Stoker Awards at WHC next year, instead of making the Stokers its own event in an already convention-heavy season, and I'm looking forward to seeing how that works.

I'm also looking forward to picking up my own Bram Stoker Award there. In the category of Awesomess.

Thank you and good day.